the battle of the Jabara valley

Saudi Arabia is the most important customer of Belgian weapons. In the last 30 years about a third of Belgian arms exports went to Saudi Arabia. In 2019 between 50% and 75% of Belgian arms exports had Saudi Arabia as their final destination. These exports have been contested in court, and the Council of State has now suspended all arms exports destined to Saudi military units active in the war in Yemen. More specifically, this concerns the Saudi National Guard.
According to the Walloon regional government, which granted the export licences, the Saudi National Guard is only active inside Saudi Arabia and not in military operations outside the country. It would therefore not participate in the war in Yemen, but only be involved in the protection of the Saudi borders. This investigation will prove this to be false.

In this report we document the involvement of the Saudi National Guard in a (failed) military operation inside Yemen. In late August and early September 2019 it supported Yemeni fighters in an offensive against the Houthi in the north of Yemen towards Kitaf, which got blocked in Wadi Aal Abo Jubarah or the Jabara valley. We also document the widespread use of Belgian weapons by the National Guard during its military activity in Yemen. We have collected video reports, reconstructed events and verified locations and weapons based on these videos. Most of the Houthi media accounts on YouTube from which we obtained our source material have recently been taken offline, but we have reposted the most representative videos used in this investigation. 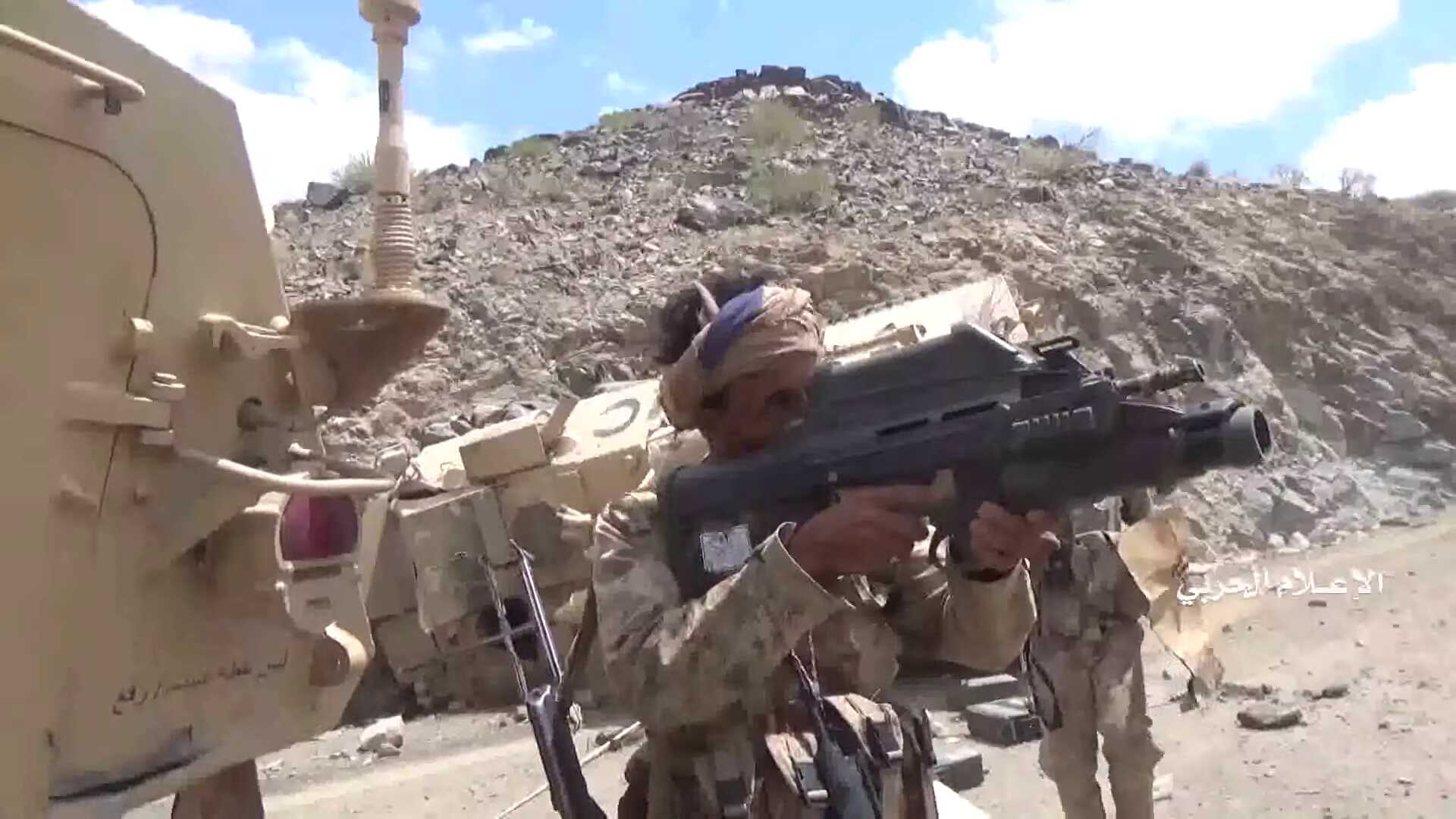 We spotted the following weapons and ammunition of Belgian origin:

(with a FN ammunition box)

FN munition, recognizable by the FNB in the lot number, can be seen in diverse calibres. Here we see 7.62mm munition, used with the FN MAG and other machine guns, and 12.7mm munition (indicated by the 0.50 inch), which is used with the M2HB.

It is possible that some of this FN material is produced in the US. However, it should be clear from these observations that any FN material exported to Saudi Arabia and especially the Saudi National guard, can end up in military operations in Yemen. Further, according to the export statistics a lot of weapons have been exported directly from Belgium to Saudi Arabia. The records of dangerous goods aboard the Bahri ships, obtained earlier through a Freedom of Information-request, listed similar munition.

Same box with the product description and the Saudi National Guard as destination.

(the box on the right) 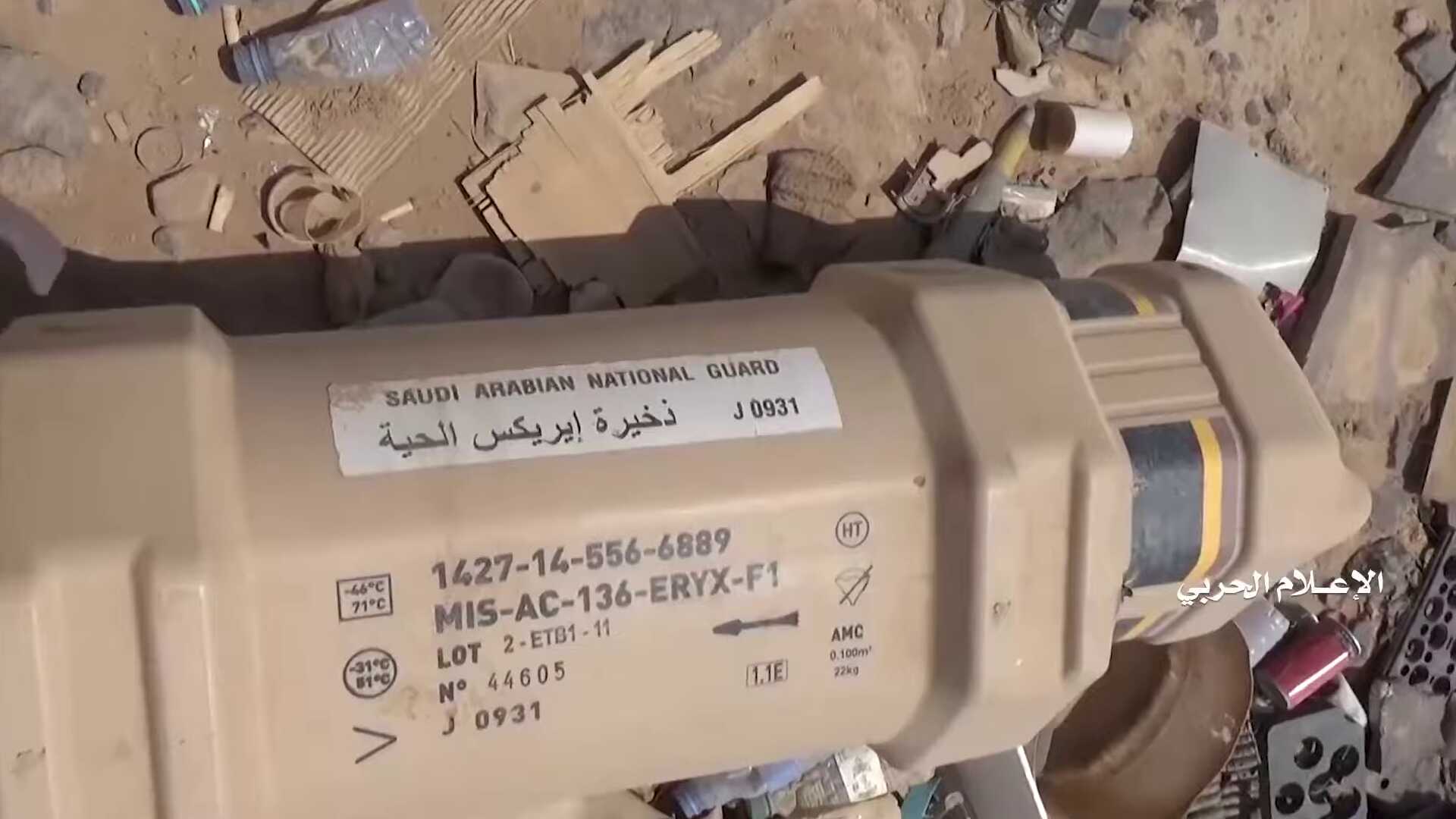 Packaging of the Eryx, a French antitank missile made by MBDA, is visible at several spots.

Most images were spread on 28 and 29 September 2019 after a press conference by the Houthi. On this press conference the Houthi spokesperson Sarea presented their military victory over the Saudi and Yemeni forces. He stated that three military brigades of the Yemeni army and a Saudi regiment had surrendered and several thousands of soldiers had been captured in an offensive near Najran (Saudi Arabia). He also claimed that they occupied about 150 km² inside Saudi Arabia. The Saudi government denied the capture of its troops and of its territory.
While the images clearly showed captured soldiers and destroyed material, several media outlets were cautious with the story as they could not verify the claims of the Houthi, such as the amount and origin of the captured soldiers, and the location or timing of the images. At that point it was not clear if some of the images were made in Saudi Arabia or in Yemen, if they all originated from the same events or if it was an assemblage of images from different events. In this report we verified the images as much as possible and present what can be reconstructed about the events.

These events can be divided in three phases.

All images which we could geolocate are situated inside Yemen. No evidence could be found of a cross -border counter offensive inside Saudi Arabia.
The following map shows the locations of the images verified in this report. 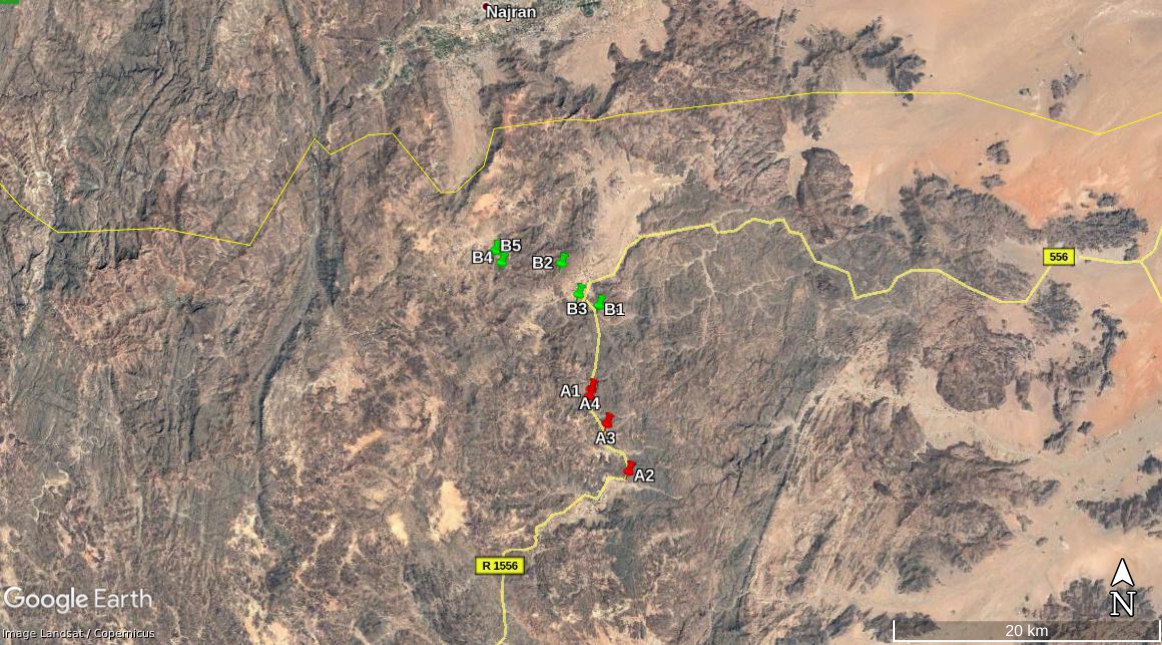 We can conclude from this investigation that the Saudi National Guard is clearly performing military operations inside Yemen. The presence of the LAVs, a military vehicle only used by the National Guard, proves their involvement in the operation towards the Jabara valley end July 2019 and at a range of positions in the north of Yemen. Small arms and light weapons used by these Saudi troops to a large extent have been produced in and exported from Belgium.

The Belgian Council of State, the main administrative court, has suspended twice export licences for similar material from FN and Mecar based on the risk that this material could be used in Yemen. Each time the Walloon government has simply withdrawn the licence and promptly started a new licencing process, the last time on 24 November 2020. It is unknown at the moment whether new licenses have been granted. (UPDATE: Via Le Soir and Knack we received the information that the Walloon government has granted again new export licences to FN.) This investigation shows that the risk indicated by the Council of State is well-founded. Any new military exports can be expected to show up in military operations in Yemen and any new export licences will therefore have the same defects.

To this investigation have contributed: Hans Lammerant, Daniel Sidoli, Laura Silvia Battaglia and the participants in the Vredesactie OSINT workshop on 17 October 2020.
However, the interpretations and views expressed in and the content of this publication is the sole responsibility of Hans Lammerant, Vredesactie.